from The Interstate Traveler Company 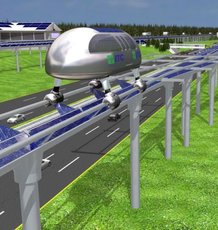 What is the Interstate Traveler Hydrogen Super Highway?  It is a collection of vital municipal utilities bundled into what we call the Conduit Cluster providing a first of its kind full integration of solar powered hydrogen production and distribution system supporting a high speed magnetic levitation ( MagLev ) on-demand public transit network built along the right of way of the US Interstate Highway Systems, and any other permissible right of way where such a machine would be of benefit.  The Hydrogen Super Highway, also known as the HyRail and the HSH, is accessed by Traveler Stations that are built within the right of way of the Interstate Highway within the land locked real-estate of the clover leaf interchanges providing maximum ease of access for all people along the route.

The Interstate Traveler Company was formed in 2002 for the global promotion and development of the Interstate Traveler elevated maglev rail system designed by company Founder Justin Sutton during seven years of private R&D starting on March 19th 1995.   After initial publications in 2002 the Interstate Traveler Project was adopted by the House and Senate of the State of Michigan each publishing Unanimous Resolutions of Support buil fund and build for the State of Michigan asking Congress for assistance.  Now in the year 2020 after 18 years of constant international promotional activities via the US Department of Commerce and the US Department of State Embassy System we look forward to launching our fully sustainable infrastructure system.

The HSH is much more than just a high speed rail system, to learn more check the following links: